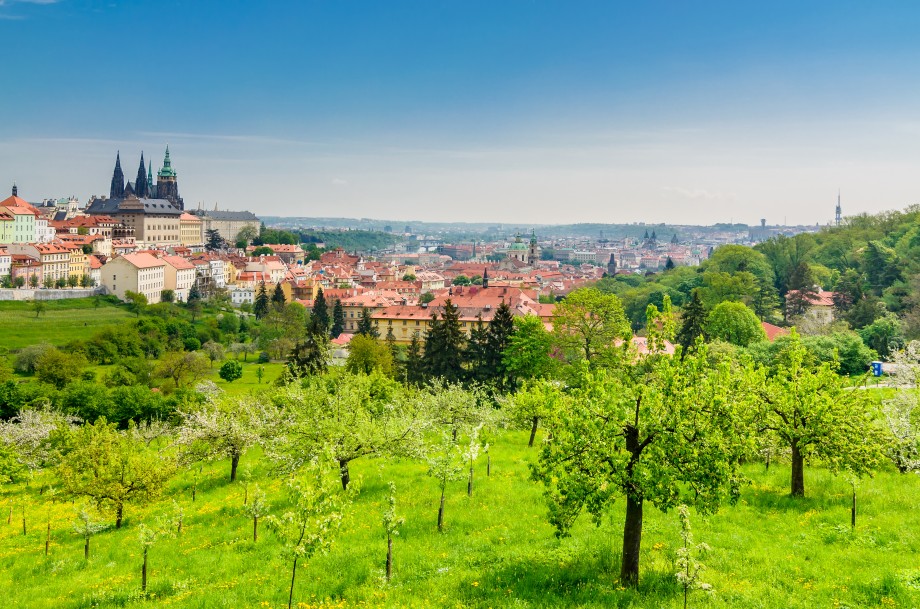 Prague is full of many, varied neighborhoods and while they all have their merits, one of our favorite areas starts at the base of Petřín Hill, where you can take in the sprawling green space in the middle of the city, or even get your exercise attempting to walk to the very top. It’s a gorgeous climb, and on the way you’ll encounter famous personalities like Czech poet Karel Hynek Mácha, as well as picnickers settling in on the slope for an outdoor meal or glass of wine. If schlepping uphill isn’t quite what you had in mind for your day, don’t worry—Petřín also has a funicular, operated by the city’s public transit system, which shuttles people up and down the steep, yet scenic hill.

After taking the funicular to the hill’s peak, you’ll find yourself surrounded by beauty all around, from the city, spread out below you like a model, to the carefully tended and fairy tale-esque rose gardens through which you can stroll. The hilltop offers no lack of things to do, and you can choose from heading into the mirror maze, where a series of funhouse mirrors make it look as if you’ve stepped into another world (it’s fun for both children and adults alike—the perfect idea for a family), or, go the scenic route and climb Petřín’s iconic observation tower. Modeled after the famous Eiffel tower, it was built during the 1891 Jubilee that was held in Prague. While it may look diminutive, locals will say that it’s actually taller than it’s Parisian counterpart…if you count the hill into the calculation.

From Petřín hill, the best way to make the most of your time in Prague is to continue walking in the direction of the castle, leading you in the same direction as another one of the city’s must-see sights, the Strahov Monastery. Founded in 1143, this monastic order has survived times of trouble and persecution, only to remain standing today. From fire to religious wars to communism, this beautiful monastery has seen it all! Perhaps the most well-known and impressive part of their whole complex has got to be the Strahov Library, which is consistently listed as one of the most beautiful libraries in the world, as well as being one of our personal favorites. 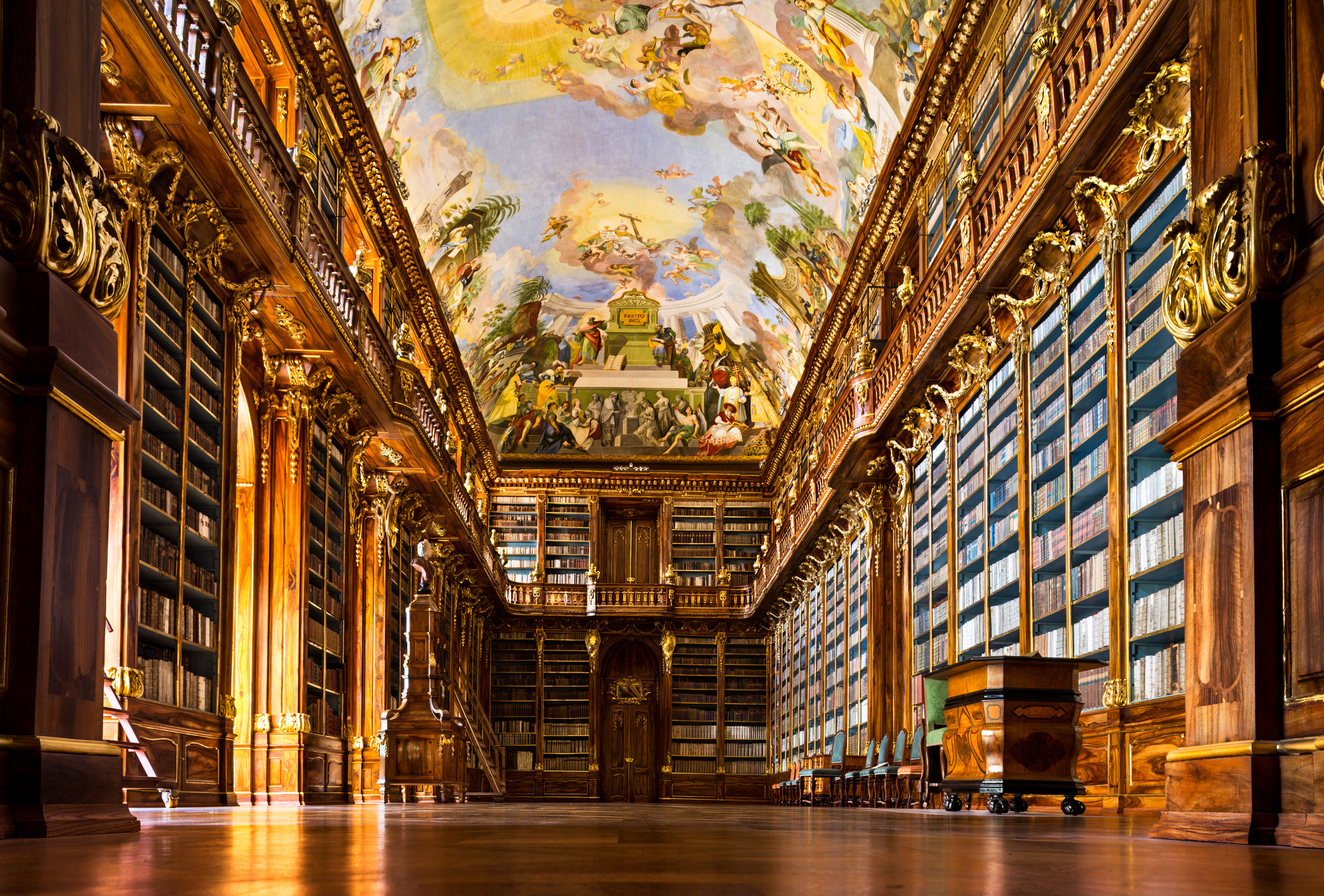 Another place of interest belonging to the monastery is the Strahov Monastic Brewery, which has been a part of the Strahov monastery since the turn of the 13th century, except for a break in 1907, when it served as farm buildings. The brewery was restored in 2000 and has since returned to the tradition of brewing a number of tasty lagers and ales. While there, you’ll find a mix of visitors and locals enjoying the beer and food—a sure sign of a great place. Try the goulash! :)

From the monastery, it only makes sense to make another religious stop—this next one being a famous site for actual pilgrimages! Just meters away from the Strahov monastery sits the Loreta, the largest baroque pilgrimage destination in Prague’s Hradčany area, aka, the castle district. Not only does Loreta contain an impressive cloister, but it also possesses an impressive carillon and the sun. Yes, you read that correctly—Loreta has Prague’s sun, and no, we don’t mean the actual one. Loreta is home to a collection of art and historic artifacts known as the “Loreta Treasure”, the most famous artifact being a diamond monstrance created in the late 1600s known as the “Prague Sun.”  It just doesn’t get any more impressive than that!

If you’re walking to Prague Castle from Loreta, there’s one place that you absolutely cannot miss—a little slice of town called Nový Svět. No, it’s not another religious stop, in case you’re feeling a little weary. Nestled between the monastery and the Castle District, Nový Svět translates to “New World” and that’s exactly what it feels like you’ll be stepping into—a surprising fact given that it’s on a main street. The neighborhood, though, is less populated by residents these days, making it a slight refuge from most of the crowds. The New World dates back to the 14th century, where it started as a neighborhood for exporters, full of tiny houses, though from the 1960s it became home to a number of Prague artists and creatives. In addition to being an artsy enclave, it’s one of the most charming parts of the whole city. One thing we would recommend checking out here (in addition to the great atmosphere) is Café Nový Svět, which is one of our personal favorites. It’s got a fantastic ambiance and selection of local coffees and cakes. It’s well worth the extra pause before heading to the castle complex, we promise! 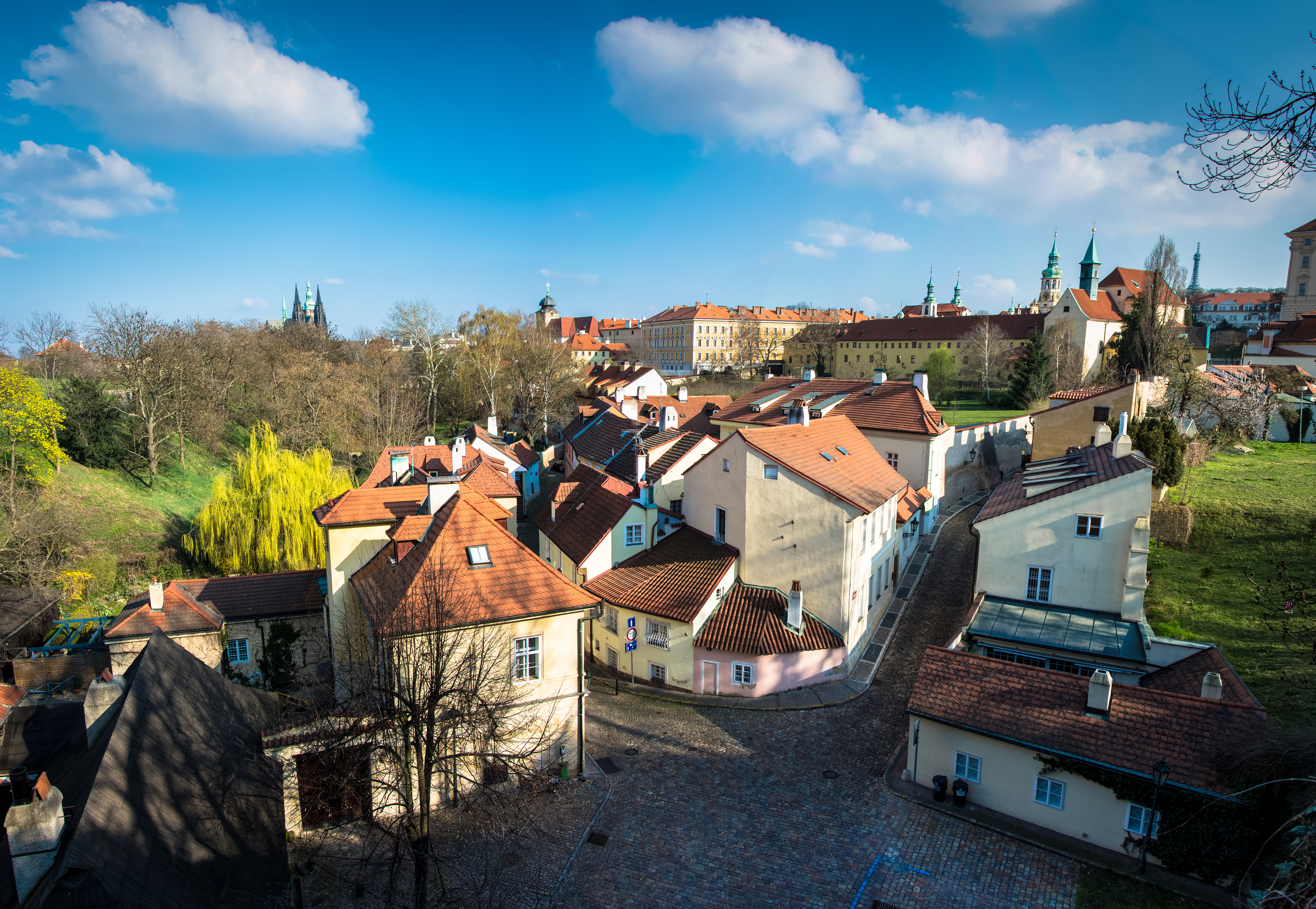 All right, all right, we’re finally getting to the area you’ve all been waiting for—Prague Castle! It’s the only logical choice after strolling through the New World…the street even leads straight to it, or Hradčanské náměstí, rather (the castle square). From here, the castle complex is sprawled out before you; an impressive sight that you can’t miss. Once the seat of the rulers of Bohemia and the Holy Roman Emperors, Prague Castle is now the seat of the Czech President. Its series of courtyards, basilicas, halls, and tiny enclosed streets is impressive, and a structure has stood in this spot since the late 9th century, making it a truly ancient stop. The most awe-inspiring structure in the whole complex is St. Vitus Cathedral, which rises up imposingly from the center, creating the classic silhouette that the world associates with Prague Castle. No trip to Prague is complete without a walk through the complex and a stop inside the Cathedral.

From the top the hill at the castle, the only logical choice of where to go next is down. With the stunning views of the city all around you, you’ll want nothing more than to follow the path, making the descent back in the center of the city. As you follow the paths down, you’ll find yourself in Malá Strana, or Lesser Town. While Lesser Town traces its origins back to the 13th century, you’ll find that the buildings around you look distinctly baroque, which is the result of a fire during the 1500s. 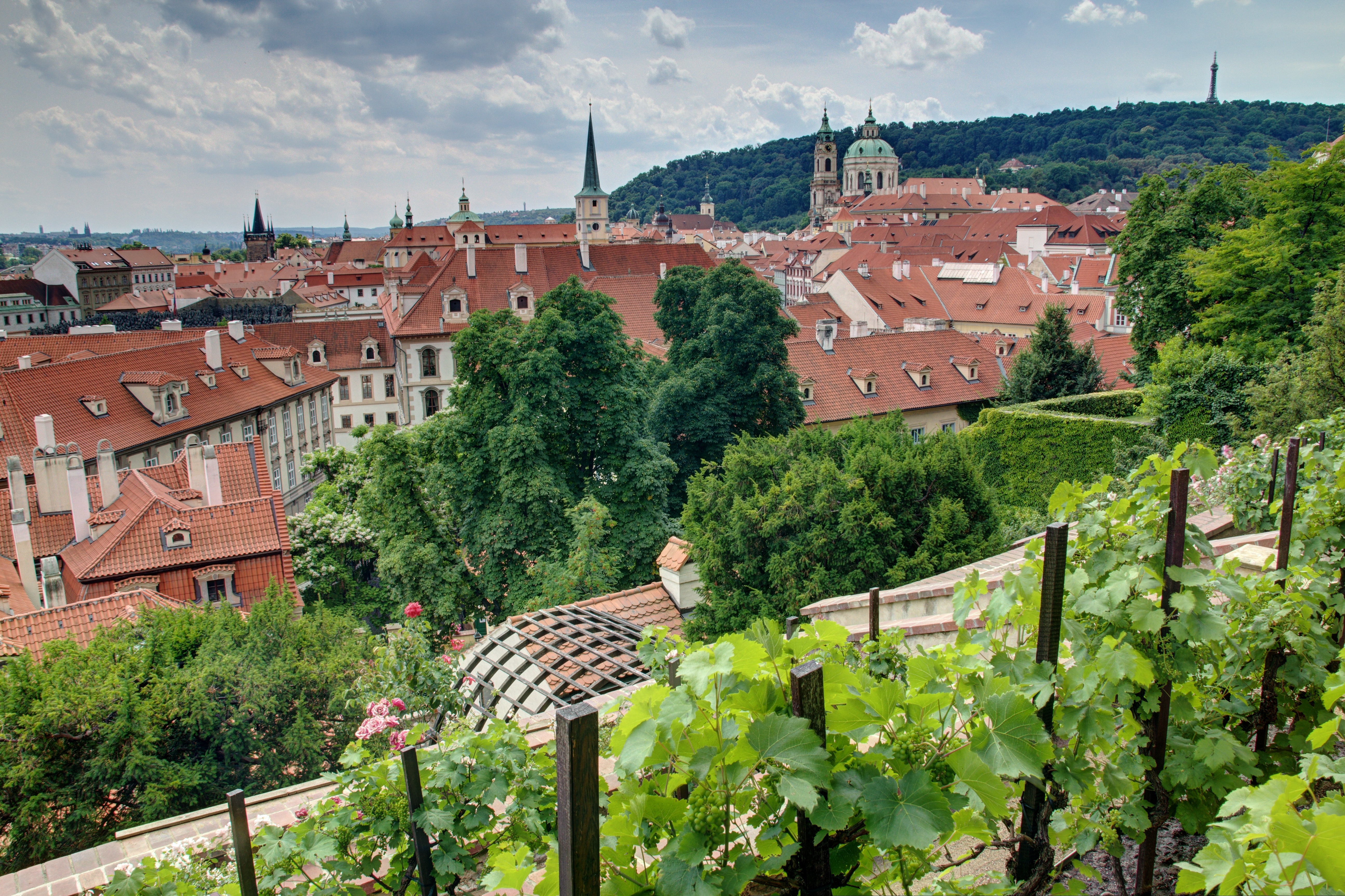 Though not a very large area, Lesser Town is home to some of Prague’s most famous sights, including the Infant Jesus of Prague, which is housed in the Church of Our Lady Victorious, commemorating protestant defeat in past religious wars. An area of interest for the poetically inclined in Malá Strana is Nerudova street, named for the famous poet, Jan Neruda.

If you’re looking for something to eat at this point in the day, you really can’t go wrong with some of the best traditional Czech fare in the city at Malostranská Beseda right on Malostranské náměstí (Lesser Town Square). Not only do they do all of the traditional meals in the tastiest ways, but they also serve up the beloved Pilsner Urquell beer. Is beer and a heavy meal not your speed? Never fear, Vinograf is here—well, on Míšeňská street, rather. It’s the place to be if you love a great glass of wine, friendly staff, and some great, light snacks to go with it all. Whichever food and drinks combo you’re in the mood for, you won’t regret either of these choices! 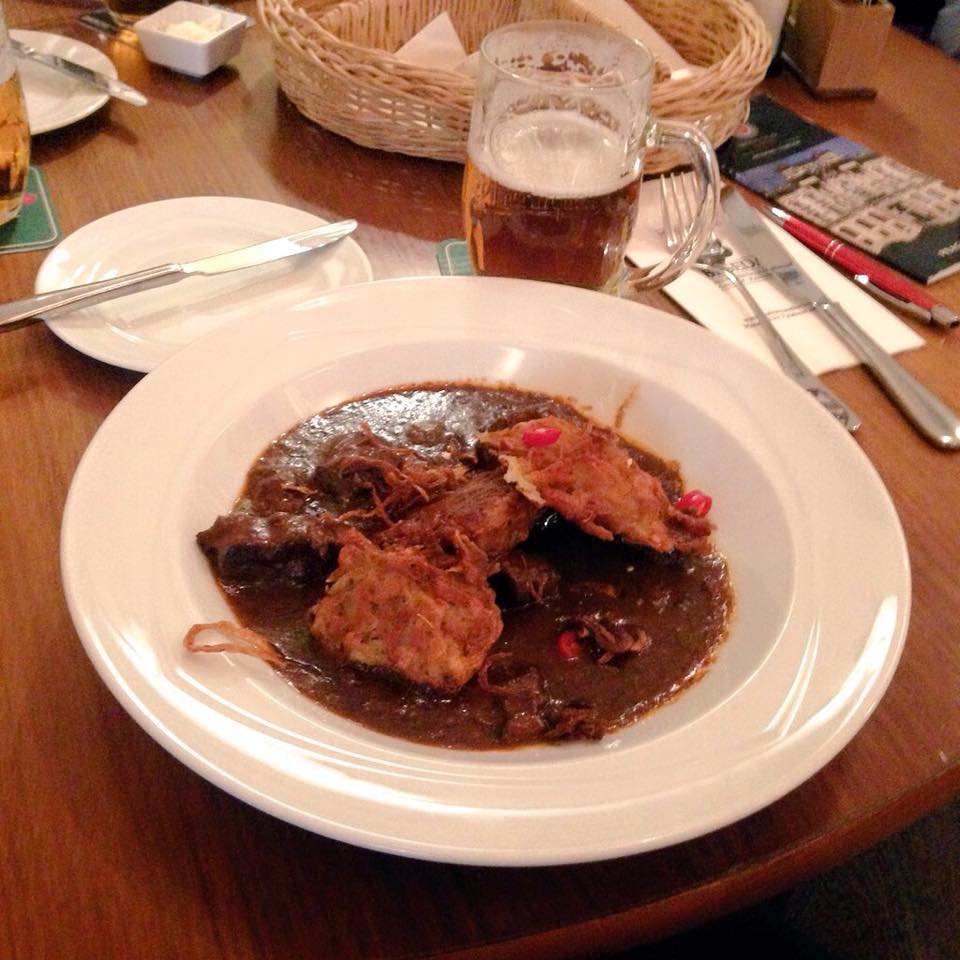 Once you’re in Lesser Town, there’s plenty to see, but we would highly recommend making the trip to check out Kampa Island. In addition to having some great green space, the island is also home to the Kampa Museum, one of the best modern art museums in all of Europe. It’s a can’t miss for all you art lovers out there!

A trip through the neighborhood would hardly be complete without a visit to the John Lennon Wall—Prague’s most colorful corner. Originally started a spot where anti-communist students graffitied art and messages inspired by John Lennon, it soon became and area of contention between the students and the communist police, who dubbed the vandalism to be an act of  “Lennonism” meant to promote Western capitalism. This led to clashes between the students and the police, but since the fall of communism the wall is now a place where people can legally tag messages of hope, love, and peace. It’s a quiet place, full of people who have wandered to see the messages or add a few of their own. On a nice, sunny day you may even find people with guitars serenading the city.

Despite the greenery and relative quite, Kampa’s position just off the famed Charles Bridge means it’s easy for people to find. Established on the sight of older bridges by Holy Roman Emperor Charles IV, the Charles Bridge has been a fixture in Prague since the 1300s, when it was once the only bridge that locals could use to cross the Vltava. Along with Prague Castle and the Astrological Clock, the bridge is one of the sights in Prague you can’t miss. Legend has it that it was constructed by mixing eggs in the mortar of the bricks, under the direction of Charles IV. For a time, many people thought this was just an old wives tale, until a study of the brickwork showed traces of egg protein in the chemical makeup. All we can say is that after standing for so many years, Charles must have known what he was doing with the construction!

Once you cross the river via the Charles Bridge, you’ll immediately find yourself on the edges of the city’s Old Town, one of the other main historic parts of the city center. If you follow the throngs of people through the winding ways, you’ll see some truly stunning sights. If you continue along the path, you’ll find that the way opens up and you’ll be in the midst of the Old Town Square. It’s the historical center of the city on this side of the river, containing the famous Astrological clock, Our Lady before Týn Church, the Old Town Hall, and St. Nicholas Church. Now, take a breath, relax, and take a break--you deserve it! You’ve just completed a perfect local’s walk through Prague! :)

by Brianna Tichy with contributions by Alena