Who was really Charles IV. 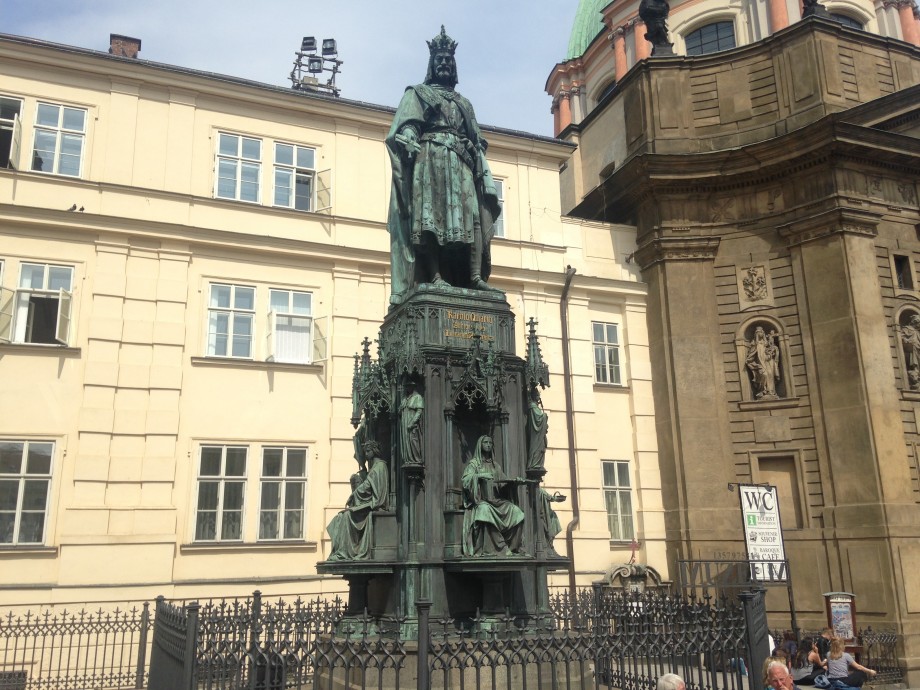 Today, if we were to talk about a young ruler who was separated from his mother at a young age by a resentful father, raised in a foreign court, was tutored by the head of the church, inherited a kingdom on the brink of being snatched out from under him, and managed to not only cement his rule, but become on of the great emperors of an entire continent, most people would probably assume it was a plot from one of the latest popular fantasy novels turned television series. While stories like these may have served as the real life inspiration to countless storytellers the world over, this situation is actually straight out of the life of one of Bohemia’s native sons, Holy Roman Emperor and Bohemian King Charles IV. In Prague, you can spot his influence almost everywhere throughout the city, and for good reason! As a ruler, he elevated the Kingdom of Bohemia to a world power and made Prague the center of the European world. This year, especially, we remember Charles and his legacy, as it marks the 700th anniversary of his birth and the whole country is celebrating! So what makes this historic ruler of the Czech lands so legendary? Read on to find out!

Born on May 14, 1316 in Prague Charles IV, then named Wenceslas (or Václav, as we say in Czech) was the heir not only of John of Luxembourg and the Kingdom of Bohemia, but of Elisabeth Premyslid, the last heir of the historic Bohemian ruling dynasty. Married as an act of politics, the marriage between John of Luxembourg and Elisabeth of Bohemia was an unhappy one. Fearful that his son would be too much under his mother’s influence, John sent young Wenceslas to live with his uncle, King Charles IV or France, where he stayed for seven years and received his education. Greatly influenced by this, he chose the name Charles as his confirmation name, meaning to honor his uncle, and becoming Charles IV of Bohemia.

Aside from his very early life, he spent much of his youth away from the Czech lands. During his time away, Charles received a fantastic education in France, studying the politics of the great Italian city states, and learning military strategy through practice in Northern Italy. The flaw inherent in this plan, however, is that he returned to Prague, Charles had forgotten most of the Czech his mother had spoken to him as a child, although he made every effort to relearn it, and successfully, too! During his adult life, Charles IV spoke 5 languages (Latin, German, French, Italian, and, of course, Czech) in a time when most rulers relied on their learned advisors to translate foreign tongues.

Despite his education, Charles’ return to Bohemia and eventual rule of the Kingdom began in precariously as he inherited a realm coming off a loss on the Hundred Years War. This did not stop Charles, however, and after being crowned King of the Romans in 1346 and King of Bohemia in 1347, Charles began the process of building the Kingdom of Bohemia as one of importance. He made Prague the seat of his rule and kept it that way even after he became Holy Roman Emperor in 1355, making the city a power player and center of culture in world affairs. During his reign, he was unceasing in his efforts to better the city, establishing Prague’s New Town (Nové Město) in 1348, which he modeled this area on Paris of the time

Charles IV also set about creating another Prague feature that you’ll notice bears his name—the Charles Bridge. Built to replace the Judith Bridge, which was destroyed due to flooding, Charles laid the first foundation for the Charles Bridge in 1357. Legend has it that Charles so wanted this bridge to stand as a testament to the strength of his kingdom, he consulted astrologists and numerologists, who told him that the best moment to break ground on the new project was at 5:31 in the morning on July 9th, 1357. Sound a bit odd to you? When written out numerically, these dates line up as such: 1357 9/7 5:31, creating a pattern that people of the time thought portended good fortune, and as the bridge has stood ever since, they may have known what they were talking about! The strength of the bridge may also be explained through the legend that (and scientific examination since has confirmed) that Charles ordered the bridge mortar to be mixed with eggs, in order to make it even more hardy.

Between the astrology and egg logic, it’s hard to keep in mind that Charles was a learned man, though he undoubtedly was. Determined to establish Prague as a modern, urban gem, Charles also gave us Charles University, which he founded in 1348. The first university in Europe on this side of the Alps, Charles University is one of the oldest continuously operating universities in all of Europe and consistently ranks within the top universities in the world. Upon it’s founding, Charles saw the need for the diverse national groups and populations of his Empire to be able to study in their own cultures, and as such founded the university with four “nations”; the Bohemian, the Bavarian, the Polish, and the Saxon. In modern times, the school evolved into being split in a Czech/German language division, though now it offers students the ability to study in Czech or English.

If you thought Charles couldn’t contribute any more to the city, you’d be wrong. Besides the Charles Bridge, New Town, and Charles University, Charles IV also contributed greatly to the Prague skyline, and commissioned St. Vitus Cathedral, perhaps the defining feature of Prague’s castle complex, in 1344. Commissioned after Prague had made the jump in status from bishopric to archbishopric and intended as a place for Charles’ coronation, the cathedral was founded in November 1344. Charles appointed the building to take place under the master Matthias of Arras, though the building master would die before his vision was realized in 1352. Not to be halted, replacement building master Peter Parler stepped in, creating some of the cathedral’s most distinctive gothic features, though architecture lovers will tell you that the cathedral still took some time to complete—it was only finally finished in 1929, though we have Charles IV to thank for commissioning this religious and architectural gem and supporting the bulk of the architectural visions.

When death finally found Charles in 1378, it was impossible to argue that he had not lived an extraordinary life, even for a royal during those times. He had been married four different times, survived many an injury and illness, established Prague as a center of beauty and culture, built in Bohemia a stable kingdom and thriving economy, and was among one of the greatest minds of his time. This year, the entire country is celebrating Charles and his legacy like never before! Just how and when can you join in the celebrations of one of Bohemia’s greatest kings? The short answer is simple—come to Prague this year! For more specific reasons and a list of the special anniversary events taking place throughout the spring and summer here in Prague, we’ve put together a whole anniversary list! Read all about the excitement in our blog!