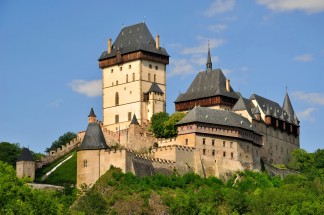 Daytrips from Prague
From $325

This half-day private trip from Prague visits Karlstejn, the most famous Czech gothic castle built by Charles IV, the greatest emperor in the history of the country. The structure holds an exceptional position among the Czech castles, as it was built to secure the crown jewels of the Holy Roman Empire. After lunch in the castle village, you will then have the opportunity to discover the Koneprusy Caves, the largest cave area in the country.

Detailed Information
On this private half-day guided trip from Prague to Karlstejn you will discover a singular Gothic-style castle nestled among the hills in the unspoiled Cesky Kras region. The most famous castle in the Czech Republic, Karlstejn was originally built to secure to coronation jewels of the Holy Roman Empire. Your guided castle tour will take you to the Imperial palace and includes a look in one of the towers of the castle.

After enjoying lunch at a local restaurant I will take you for a scenic drive through the surrounding protected landscape on our way to the largest cave area in the country, formed from 400-million year old Devonian limestone and consisting of three levels a total of 70km underground.

Included in the tour rate:
Services of private Prague tour guide
Private transportation in a comfortable vehicle with a professional driver and A/C
Hotel pick-up and drop-off

Additional Information:
There is a lot of walking involved on this guided day trip from Prague – wear comfortable shoes and be ready to climb some stairs in the cave area. Also bring some additional layer of clothing as the temperature in the caves is around 10°C/50°F.

This half-day trip is available from April through October, daily except Mondays.